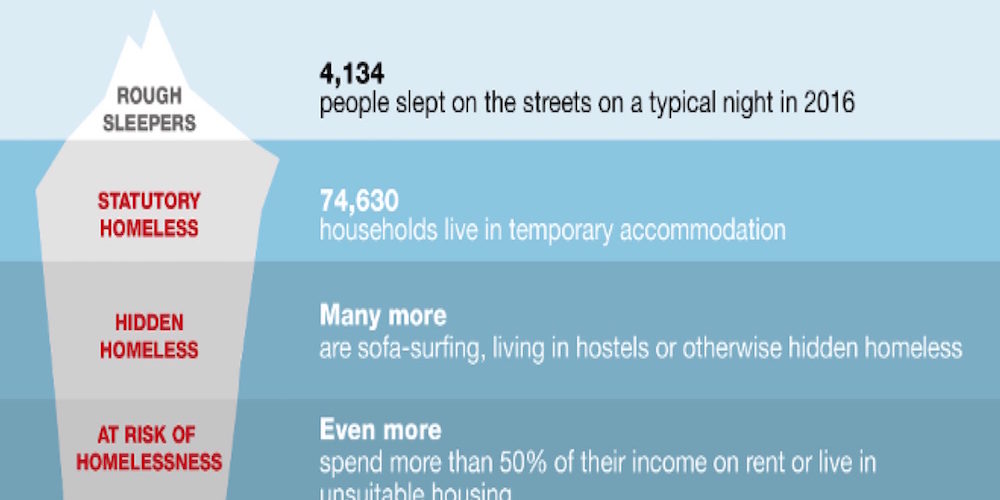 At Minor Oak on 27 January, I was invited to do a Pecha Kucha presentation (20 slides x 20 seconds) on my forthcoming trek across Iceland in support of Shelter. The weather has improved a bit since that bitterly cold winter night, but the thought then of anyone sleeping on the streets should make a rich nation ashamed.

Victims of the UK Housing Crisis 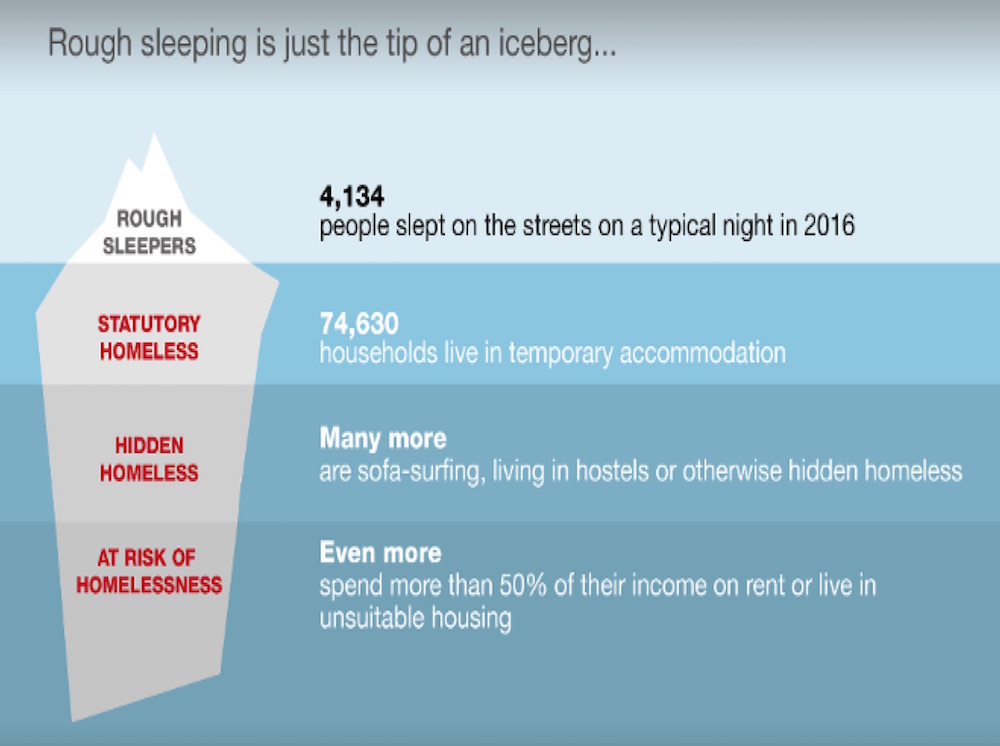 The problems are not just about rough sleepers. There are probably only about 5,000 people suffering in this way and a committed Government could do something about it. The issues run much deeper, with 124,000 children homeless last winter and over 74,000 households in temporary accommodation. Deeper again are the issues of the hidden homeless: people sleeping on sofas or living in hostels.

It’s easy to judge some of the circumstances that cause this, but what can really get personally frightening is that the many people who spend over 50% of their income on rent are also at risk of homelessness. Many people are only a bit of bad luck away from losing their home; just one big bill or a life disaster like redundancy or divorce can mean homelessness. Unlike other countries, private leases are short in the UK, with little security that would allow communities to form. Buying a home is the dream of most English people, but it is now becoming impossible for many people, with the Government putting a budget on an Affordable home in London at £450,000. That’s not affordable for most people, even for many with post-secondary education and good jobs.

The Government says it is investing £550 Million, but the problem has to start with supply of really affordable homes. In 2015/16 only 32,110 Affordable Homes were built, including a paltry 6,550 Social Homes. The post-war Labour Government built a million homes – 80% of them were council houses – and more recently, in 1968, over 425,000 affordable homes were constructed. So what was the pressure in the 1960s that persuaded the Government to invest in low-cost bricks and mortar? 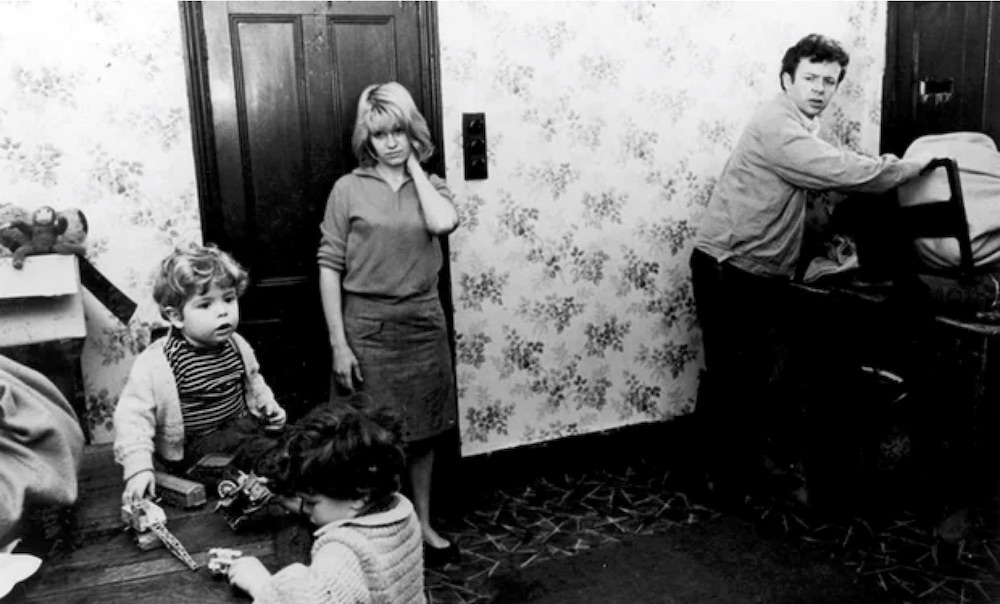 The answer was the homelessness charity that works to alleviate the distress caused by homelessness and bad housing: SHELTER. They do this by giving advice, information and advocacy to people in housing need and by campaigning for lasting political change to end the housing crisis for good. I am old enough to remember when the film “Cathy Come Home” came out in 1966, and I’d hoped lessons had been learned since then.

I can’t run marathons or ride my bike to Paris, so instead I am trekking miles across Iceland to raise a few thousand pounds to help. I will be driven every step of the way by the recent Housing White Paper, where it is clear that the Government are trekking through an even more barren policy landscape than I will be trekking through just a few degrees south of the Arctic Circle this summer.

I have worked in Social Housing for more than 30 years, and for me Shelter stands out as something worthy of support. OK you can see right through me, I am after your money in this blog post.

Donating through the link below is simple. Shelter will receive your money quickly and easily and if you are a UK taxpayer, an extra 25% in tax will be added to your gift at no cost to you.

Many thanks for your support, and if you want to join me just follow this link or buy some boots and sign up. If anyone wants me to show my presentation, it only takes about six and a half minutes, let me know and I’ll bring it along. 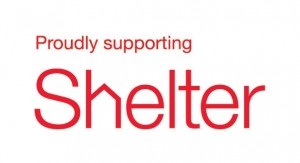 England could not beat Iceland, but I will with your help! 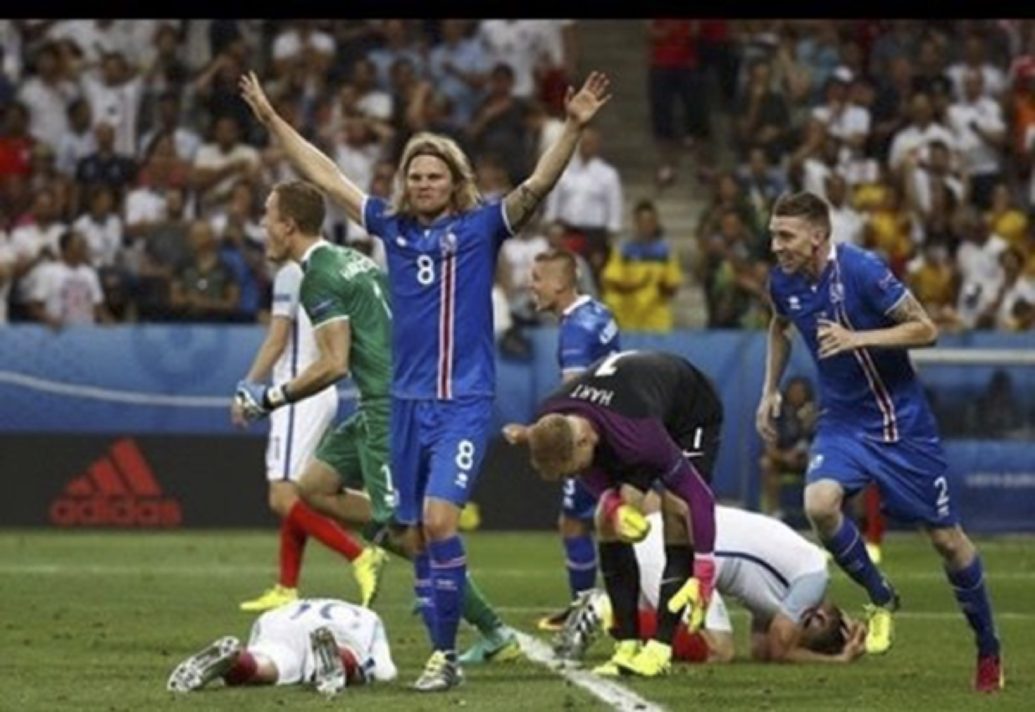